The term “NeuroCOVID” encompasses the neuropathological, cognitive and neuropsychiatric symptoms of coronavirus disease 2019 (COVID-19) and long COVID. Post-mortem studies have shown that the brains of deceased COVID-19 patients have cerebrovascular abnormalities, including permeability of the blood-brain barrier (BBB), T cell infiltration, gliosis, neurons and synapse losses.

Likewise, studies have shown that middle and older aged people are highly susceptible to NeuroCOVID. Accordingly, COVID-19 patients between the ages of 36 and 65 have elevated markers of endothelial inflammation and neuronal injury in their serum two months after contracting mild COVID-19. Similarly, older COVID-19 patients also suffer from anxiety, post-traumatic stress disorder, and dementia.

In the current study, researchers assessed the effect of age and infectious SARS-CoV-2 on the BBB live, hypothesizing that age-related declines in BBB function and the wingless (Wnt)/β-catenin integration site exacerbate NeuroCOVID. Note that Wnt/β-catenin promotes BBB maintenance and repair in adults, and SARS-CoV-2 infection can compromise BBB.

The team intranasally inoculated two-month-old (young) and 12-month-old (middle-aged) C57Bl/6 mice. They used a mouse-adapted strain of SARS-CoV-2 for their experiments to cause lung infection in test animals.

The researchers measured neurological and neuropathological outcomes in mice at the peak of viral replication in the lungs, i.e. four days after inoculation (4DPI). After 4DPI, they euthanized mice and prepared sagittal brain sections for histology. They also performed immunostaining for cerebrovascular basement membrane collagen IV with 4′,6-diamidino-2-phenylindole (DAPI) nuclear counterstain.

The researchers performed quantitative reverse-transcription polymerase chain reaction (RT-qPCR) for SARS-CoV-2 viral ribonucleic acid (RNA) at 4 DPI. Additionally, the team measured foci of inflammation in the BBB, blood-brain barrier and blood-cerebrospinal barrier and assessed the neuroanatomical distribution of T cells in the CNS.

The authors observed SARS-CoV-2 RNA in several CNS tissues but could not detect viral RNA in the lungs. They also found that pathogen-associated molecular patterns were highly expressed in the brain after SARS-CoV-2 infection and did not differ by age. 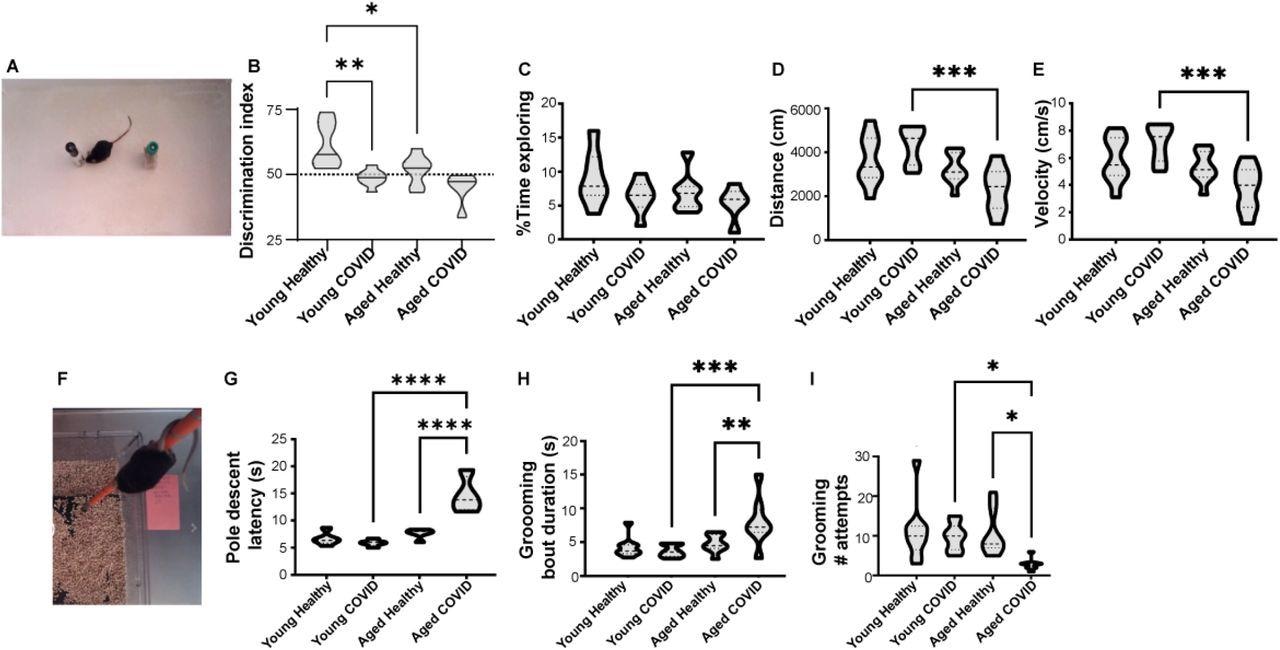 Robust canonical activity of Wnt is required to maintain the resilience of young adults to SARS-CoV-2 infection. BBB permeability in aged infected mice was due to loss of caveolin-1 deletion of Wnt3 and Wnt7a, which may exacerbate inflammation by enhancing delivery of viral material through the BBB. Data from the study suggests that loss of Wnt-β-catenin in the aging brain creates vulnerability to NeuroCOVID.

Caveolin-1 is a scaffolding protein that promotes BBB transcellular permeability, while brainstem Zonula occludens-1 (ZO-1) is a protein that stably links junctional proteins to the cytoskeleton to limit permeability macromolecular. SARS-CoV-2 infection in middle-aged mice induced down-regulated BBB Caveolin-1 and ZO-1 transcytosis protein. However, the infection did not cause any apparent changes in the tight junction proteins. Taken together, these data indicated that age exacerbates BBB transcellular leakage caused by SARS-CoV-2 infection.

According to the authors, this is the first study to experimentally test the impact of age on SARS-CoV-2-induced neuropathology in a small animal model. The authors demonstrated that age worsened the dysregulation of Wnt/β-catenin signaling and BBB permeability.

Curiously, the transcriptomic signatures of brain endothelial cells are conserved between COVID-19 and Alzheimer’s disease. Additionally, cerebrovascular damage caused by SARS-CoV-2 infection could accelerate vascular cognitive impairment and dementia (VCID). Of particular concern is that 1.6% of adults over the age of 65 were diagnosed with new-onset dementia within the first three months of SARS-CoV-2 infection. Additionally, it was 2.4 times more common after COVID-19 than other acute health events. In the years to come, the additive effect of the increase in neuropsychiatric illnesses, including COVID-related dementia, could be staggering. To conclude, age worsened BBB disruption, neuroinflammation and neuropsychiatric presentation in SARS-CoV-2 infected mice. These findings necessitate the identification of potential new therapeutic strategies to increase the resilience of the aging brain.